An important consideration for the game I'm building is how the weapons European explorers brought to North America balance against the weapons made by the indigenous peoples of North America. Role playing games habitually underrate non-metal weaponry. Maybe because of an implicit sense of racial superiority, but I think it's more likely because of an assumption of linearity in development.

In European history, bronze beat out stone, iron beat out bronze, and steel beat out iron. White history has traditionally been defined by that hierarchy of military development, and so we tend to assume that stone is the worst and steel is the best, in all things. But there's a lot of complexity involved here. For example, one advantage of metal weapons is that they last longer, making them superior to stone weapons at a strategic level, but that advantage doesn't necessarily extend to a tactical level. Moreover, metal can be shaped into armor, which is pretty danged effective at stopping stone weapons. But then gunpowder came along, and made it possible to field weapons en masse that were capable of punching through even the best, most expensive armor that could be made - and from a long way away. Armor dwindled as guns proliferated. By the time Europeans began pushing inward into North America, the only remaining traces of armor were decorative or ceremonial. Colonists and explorers wore buckskin and cloth, not chain-mail or plate. Without armor, the major advantages guns held over bows and other projectiles were largely negated.

Guns were still deadly, of course, but not necessarily more deadly than their native counterparts, and they were certainly slower to fire and more difficult to maintain. Another important distinction between bullets and arrows is the prognosis for an injury; while gunshot wounds are probably more likely to be instantly fatal due to the higher kinetic energy imparted, arrow wounds are much more difficult to treat. Arrowheads and spearheads are larger than bullets or musket balls, can be shaped wickedly, and - when made out of stone or glass - are prone to shatter inside their target.

To account for this and some other considerations, I've doing three significant things: 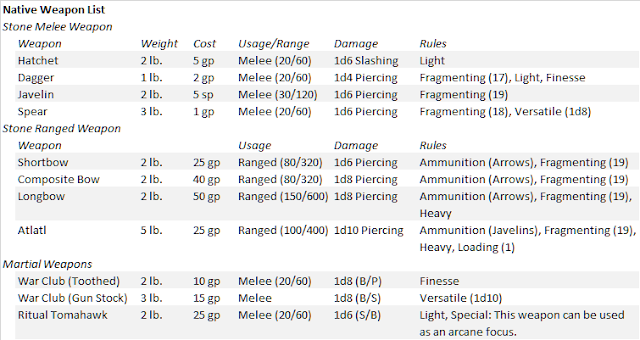 So, in addition to simple weapons and martial weapons, we have a "Stone" category that indigenous characters in the campaign will have proficiency in. Piercing weapons in the stone category all share a new feature: Fragmenting.

Fragmenting (X): When the final attack roll with this weapon is X or higher, this weapon's blade or head shatters. If the attack was successful, it shatters inside the target, leaving behind shrapnel. If the attack was unsuccessful, it shatters outside of the target, inflicting no damage at all. Either way, the weapon or ammunition cannot be used again until it is repaired.


(This game mechanic was inspired by a Deadliest Warrior demonstration, in which a man quickly plunged several flint daggers into a dummy, deliberately breaking the blades off each dagger rather than pull the weapon out. Hence, the blade breaks on a higher roll rather than a lower roll.)

Shrapnel: A creature with shrapnel in its wound cannot be healed until the shrapnel is removed. Removing shrapnel is a form of "Field Surgery" (more on that in a later installment). The healer must pass a DC 10 Dexterity (Medicine) check to remove the debris, and each attempt to remove the debris inflicts 1d4 slashing damage on the wounded creature.

I'm trying to get a historical fantasy game rolling on Facebook using D&D 5e as the base, but making some substantial tweaks to make it suitable for the time period. The game has no direct connection to my books, but I've double-dipped on research before, so you never know. Either way, posting special rules here is more convenient than fishing around for the Notes page in Facebook's mobile app, so I'm going to post my custom rules here, starting with firearms.

This game occurs at the break of the 19th century. In the real world, infantrymen with mass-produced firearms had long since ended the era of armor, but in small skirmishes between unarmored opponents on the American frontier, the stopping power of a gun often as not lost out to the speed and reliability of a bow.

That asymmetry is part of the drama of combat in that time and place. It produces tension and suspense that is lost if muskets are treated like they can be reloaded in less than 6 seconds. I want players to have that experience of fumbling for powder and ammunition as an enemy charges at them. The frustration of numbed fingers trying to jam a lead ball down an iron tube that's been shrunken by the cold. The desperate scramble to keep your gear dry in driving rain. So, here's what I've arrived at: 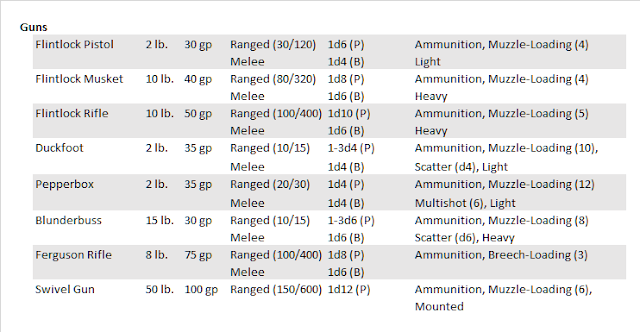 Guns are martial ranged weapons. They have a loading time that differs from weapon to weapon, denoted by "Loading (X)". Reloading such a weapon requires the user spend X turns taking an action to load the weapon, passing a difficulty check with each turn, based on the conditions under which the weapon is being loaded. A user can rush the reloading process, dropping X by 1, but makes the reload checks with disadvantage.

Under ideal conditions the reloading check will be a DC 0 (automatically passed), but the difficulty will increase depending on how many of the following conditions apply:

If a reload check is failed, the user does not make or lose progress on their attempt to load the weapon. However, if the loading process is interrupted in some way (e.g., the weapon's user takes damage), the player may be required to make a concentration check as if they were casting a spell. If the concentration check is failed, the loading process must be started over from the beginning.

(This is my attempt to differentiate between not reloading the weapon efficiently, and outright failing to reload the weapon.)

A character who is proficient with martial weapons adds their proficiency bonus to the loading checks and to the concentration checks.

(In my mind this concentration represents the discipline under fire that separates a soldier from an armed civillian.)

Finally, given the mercurial nature of period firearms, rolling a natural 1 on an attack roll made with a firearm damages the weapon. It cannot be used again until it is repaired by a blacksmith.

(I considered a more elaborate system for handling misfires, but a nat crit fail happens often enough without tracking other factors that further increase the likelihood of your gun jamming.)

Some other details about firearms:

Folding Knife: 1 lb., 2 gp, Melee (10/30): 1d4 (P); Finesse, Light
Special: This blade must be permanently attached to the barrel of a pistol. It folds back against the barrel when not in use, but can be extended as a bonus action.
Bayonet (Screw In): 2 lb., 5 gp, Melee: 1d8 (P); Heavy
Special: This blade must be screwed into the barrel of a musket to be used. The musket cannot be loaded or fired while the bayonet is attached.

Bayonet (Slide On): 2 lb., 5 gp, Melee: 1d6 (P); Heavy
Special: This offset blade slides over the end of a barrel. This bayonet leaves the weapon clear to fire but provides a minor obstacle when loading the weapon; a the loading action cannot be rushed while this bayonet is attached.


Athena stood on a rise overlooking Piraeus and Moschato, which sat on either side of the mouth of Cephissus’s river in Attica.

“I have a number of missions for you, my friend,” Athena said to the owl perched on her shoulder, “But your first mission will be something very personal. An old friend of yours is in need of help, though she does not know it.”

Nemesis carried the body away from the farmlands - she didn't want the widow finding his corpse the next time they plowed the fields, so she headed to the nearby forest and collected wood for a pyre.
"How do you feel?" Nemesis heard the voice again, but this time she recognized it.

Nemesis had gone to Tartarus partly hoping that the masters of the underworld would be able to spare her from the pregnancy that Zeus had inflicted upon her, but Hades had been unable to do anything about it - if either of the parents had been mortal, perhaps, but with god-blood from both sides, there was nothing conventional to be done. As Nemesis's due date came closer, he did come up with a risky alternative involving an egg (for lack of a better word), that allowed Zeus's offspring to be removed from Nemesis and birthed by a surrogate mother devoted to Persephone.